The new bed has solved my alignment issues. It's all Mitsumi rail.
If I had to do it again, I'd probably get 80mm tall for the machine outers, but I already had them.
Here's the construction I used: 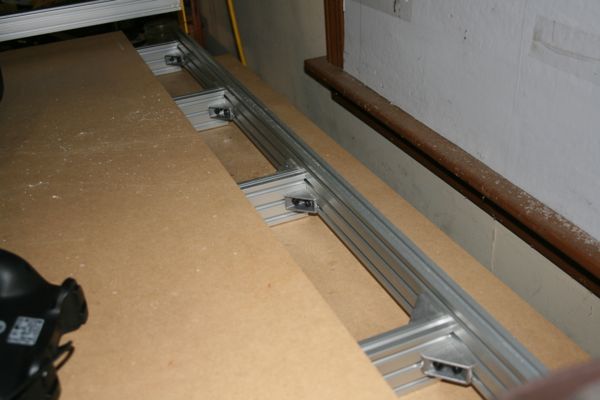 And the entire machine - sorry I didn't clean up for a glamor shot. 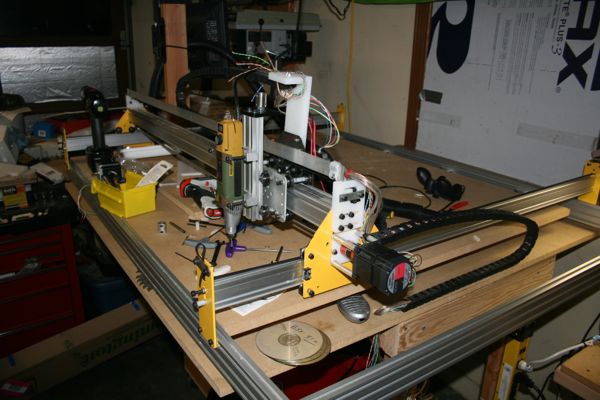 Note that my Z axis is sans Motor. I fired up a pair of steppers today. I swapped on some spare motors and everything is good. My power supply was too much for the little nema 17 and one of my Nema 23s! The new motors run nice and cool.
The 17 actually melted part of my shop vac hose, and after cooking it lost a bunch of torque. After hacking around a bid (put the flex coupler in my lathe and drilled it for a 1/4 shaft) I found that the Z axis bearing decided that it's a good time to pop out!

My solution was to order Improbables Nema23 kit. I've stolen the motors from my other mill, so I can't make replacement parts without re-assembly. The plan is to buy more motors and rework my other mill sometime.
I also got some of his 660 mounts to have them on hand later on. I may sit down and figure out an aluminum spacer kit for the double makerslide build. I don't like the plastic spacers, but they work for the moment.

Meanwhile, I should really wire up my limit switches and I'm thinking of adding a small panel on the edge of the table that sticks out - putting an emergency stop switch there and probably a jog button panel. I usually use a logitech game pad, but it gets ripped out the PC and flung across the room every so often when things are being moved around the shop.
Will

I murdered a couple of steppers, including the wee nema 17 on the Z axis. After almost hacking out a mount from stuff in my shop, I decided to order the kit that improbable construct offers. (quick shipping!)

This is the first thing I cut with the new motors mounted up.

Now I just have to solve some play/backlash...

That looks like the type of backlash I was seeing when my belts were too loose.
I have them pulled really tight now and the backlash is much less.
Looking at the picture of your machine I am going to guess you are getting flex in you X axis belt holders.
Are your X axis belts still in the stock format or have you flipped them? I can't tell from the picture.
Shapeoko #Classified some of the bolts may be original parts.
Shapeoko 1 # ???? Stainless plates, still in the box.
Shapeoko 2 # 3926 not stock
Shapeoko 3 # 0003
Store:
http://ImprobableConstruct.com
Twitter:
https://twitter.com/ImprblConstruct
Top

The X belt is stock. I so have some custom belt holders on it, but they only have mild flex. How did you flip and keep enough contact?

Also - thanks for the fast shipping! That nema23 kit fit very nicely! (The plastic bag was cut along the edge of the delrin part, but that was probably from shipping.)
Will

willo wrote:The X belt is stock. I so have some custom belt holders on it, but they only have mild flex. How did you flip and keep enough contact?

It's not just the flex in the mounts but the bounce in the mounts and the belts at that length.
You have to get the belts really pulled tight to get the bounce out.
I moved the idlers down as far as they could go without hitting the makerslide and in toward the motor as far as I could go and still get the bolts in. (Actually the first time I did it I got a bit close to the motor and had to grind half of the heads off the bolts to get them to fit.)
I have been running that setup for over a year and it has been fine.
I have the belts squeezed between some aluminum angle on the ends.

willo wrote:Also - thanks for the fast shipping! That nema23 kit fit very nicely! (The plastic bag was cut along the edge of the delrin part, but that was probably from shipping.)

No Problem! I try my best to ship within 24 hours of an order. If I am out of town it takes longer but I usually send an email if its going to be more than a couple of days.
Thanks for the feedback on the bag. It wasn't that way when I put it in the padded envelope, but who knows what the post office did to it before it got to you.

Shapeoko #Classified some of the bolts may be original parts.
Shapeoko 1 # ???? Stainless plates, still in the box.
Shapeoko 2 # 3926 not stock
Shapeoko 3 # 0003
Store:
http://ImprobableConstruct.com
Twitter:
https://twitter.com/ImprblConstruct
Top

Aha. I see. So flip the belt, lower the idlers to compensate.

Interesting, I didn't have the issue on Y - but I have dual belts there with my shaft drive. Let's see, how can I shore that up?

0) invert things, try to achieve improbable zen (0 is for convenience, not as an insult)
1) Bigger belt? swap the pully, grind off the edges or turn new idlers on the lathe (or buy some).
2) Dual belt X? I could use a double wide pulley...
3) Dual belt X - top and bottom A sync belt between them perhaps.
4) Rack and pinion

I will ponder (and tighten things)
Will

Tightening things should be sufficient --- if you want to change things, I'd try a different style of wider belt --- the next iteration of ShapeOko is to use GT2 belting: