Hello , I am new to the CNC world but have been a machinist for 23 years. I bought a shapeoko 3 and it runs great using makercam and carbide 3d. I've ran a few wooden signs to get a feel for the process and now it's time to get a little more serious so I can run prototype projects in wood and plastic. I have been using Fusion 360 for a few weeks and absolutely love it, but when I create a tool path and run the grbl post processor I get errors trying to run on the machine. Any advice on what I may be doing wrong? I have zeroed the machine, drew simple parts such as 3"x3" rectangles , still no luck , it doesn't like the g code fusion 360 is spitting out. Any tips would be greatly appreciated. And I am new to the computer/cam/g code side of things so speak slowly

Which post-processor are you using?


In terms of workflow, Fusion includes a very good GRBL v0.8 post-processor, so your workflow with Fusion 360 is simply this:
Build your model in the CAD editor -> Switch to CAM mode and construct your toolpaths -> Compile the NC file using the GRBL Post Processor -> Mill with Universal G-Code Sender.

I am using the grbl.cps-generic GRBL selection from fusion 360 and Carbide Motion. I dug through posts and found that I had to delete g28 and that made it run basic rectangle and even an island. If I try to load anything with a curve in it I get "error in line xx bad arc format no I/K. I have hope, little by little. Should I try a different post processor from the list? Thanks for the response .
Top

Back from another hitch at work and had time to play. This worked great, Thank you for your help!
Top 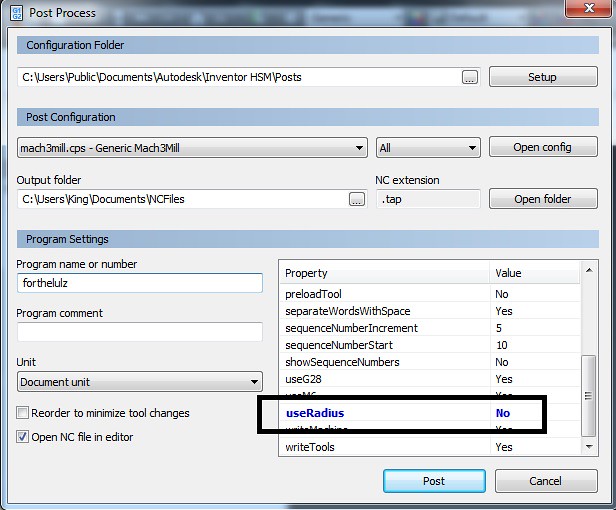 Has anyone found a solution to canned cycles in Fusion 360?

I've been posting my drill steps in 'generic grbl', and my milling in 'generic mach3'...but I'm getting sick of having to post and run two separate files.
Top

I think they advise you to turn g28 off too. I did. I use HSM Express in Inventor which is nearly the same as Fusion without the 3D.

Why grbl for drilling and mach for milling? Does Carbide not recognize something? I haven't tried drilling yet.
Shapeoko 3, #405 / Dewalt 611 w/Super PIDv2, limit switches
Top

If you use the grbl post processor it converts the drilling into simple G01 linear commands, but for for milling it throws the 'bad arc format, no i/k' error.

So I've been posting two files, one with the grbl post processor for spot drilling, and one with the generic Mach3mill post for all the milling ops.

I've considered using a complete grbl post (with drilling and milling all included) along with universal g-code sender (UGS), but UGS doesn't appear to allow tool changes; so I'm back to posting and running two files; which is what I'm trying to avoid.

I need to figure out a way to either edit the grbl post processor to fix the arc error, or edit the mach3 post to eliminate the canned cycles...I just have NO idea how to begin.
Top