I finished my ShapeOko build a while back. I'm using a 300W 48V DC spindle with ER11 collet, bought off eBay (http://www.ebay.com/itm/ws/eBayISAPI.dl ... AQ:US:1123)
I made a couple of boards, and have learnt a lot from the process.

The boards were designed in KiCad. The Gerber code was converted to G-Code using LineGrinder. For engraving, I used these 10 deg engraving bits from eBay (http://www.ebay.in/itm/ws/eBayISAPI.dll ... 4215wt_902) 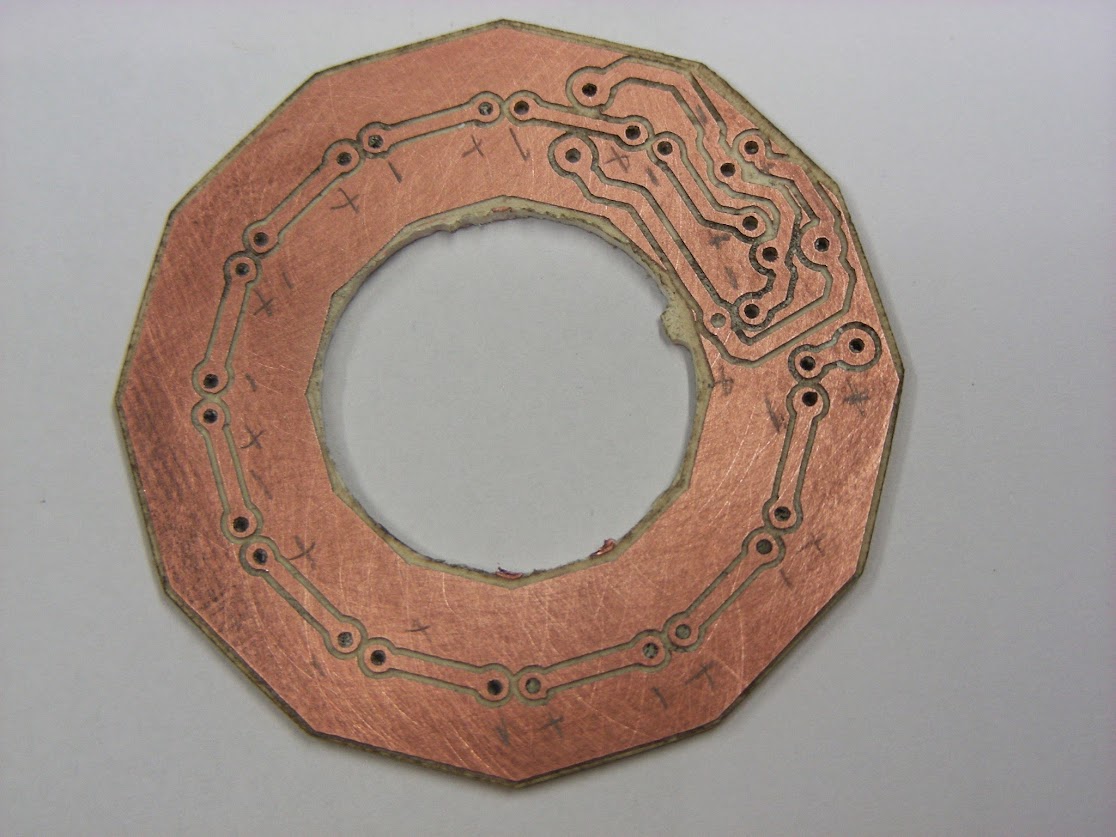 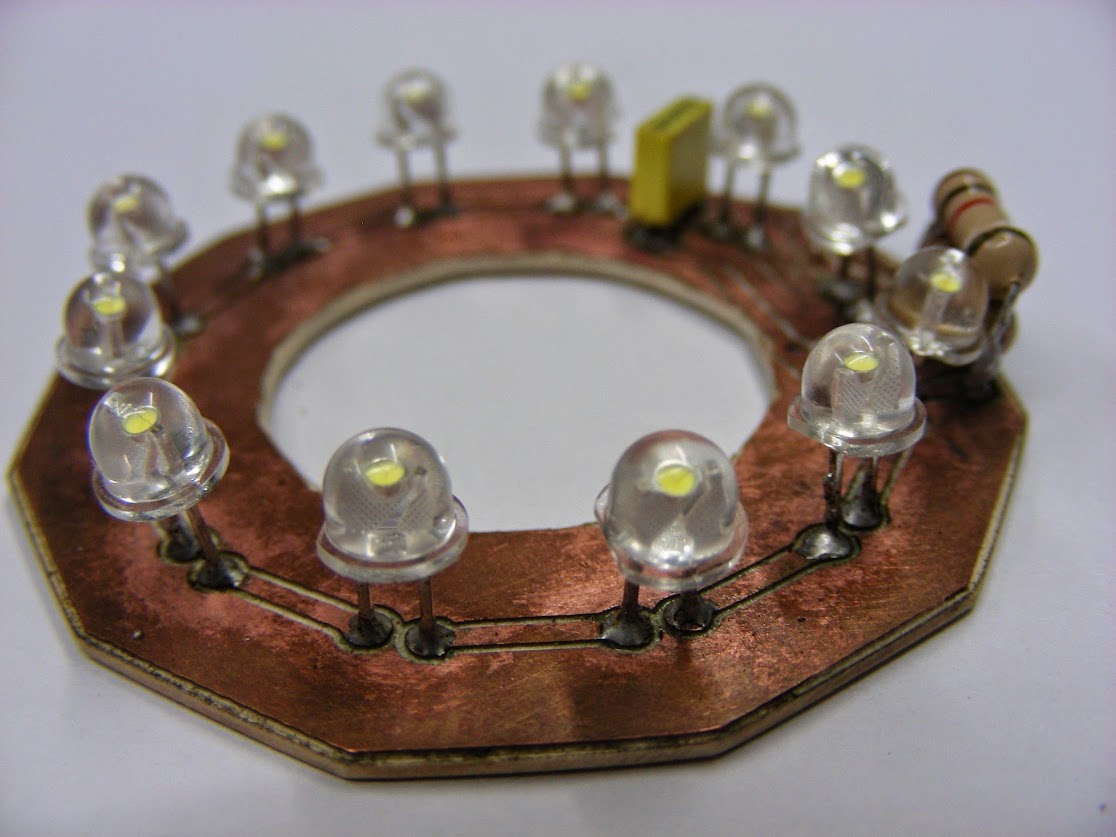 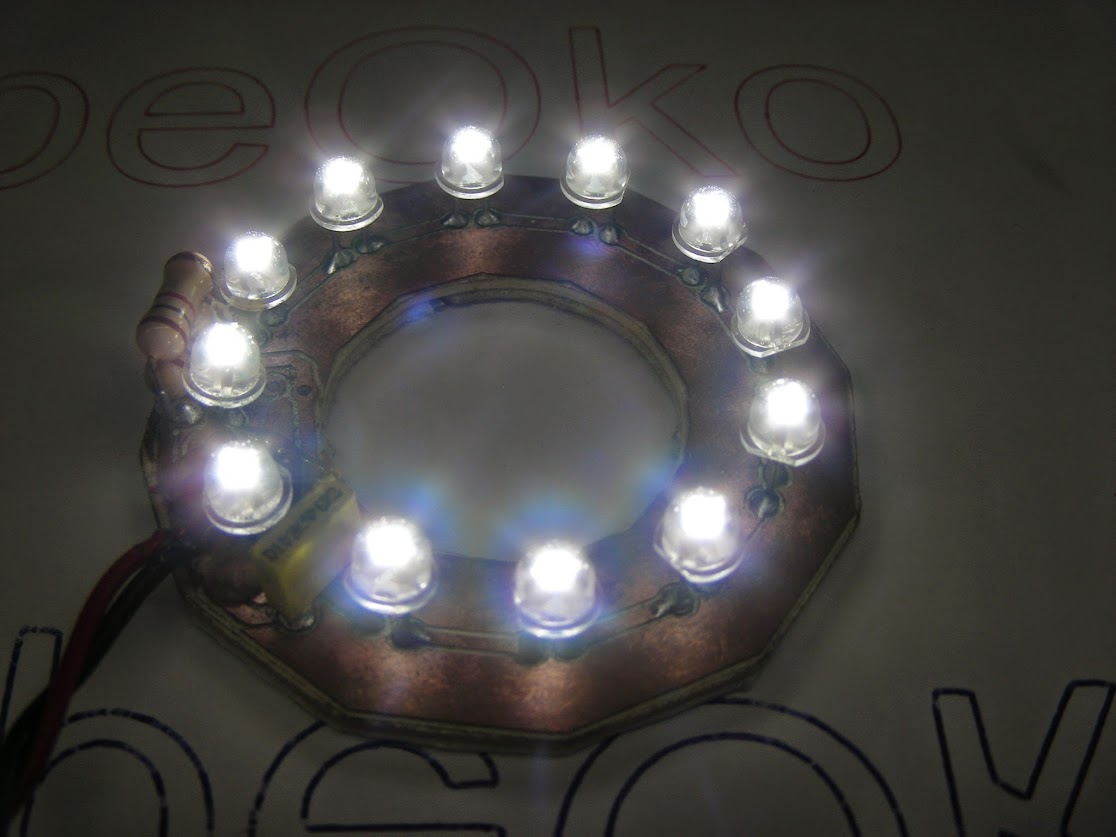 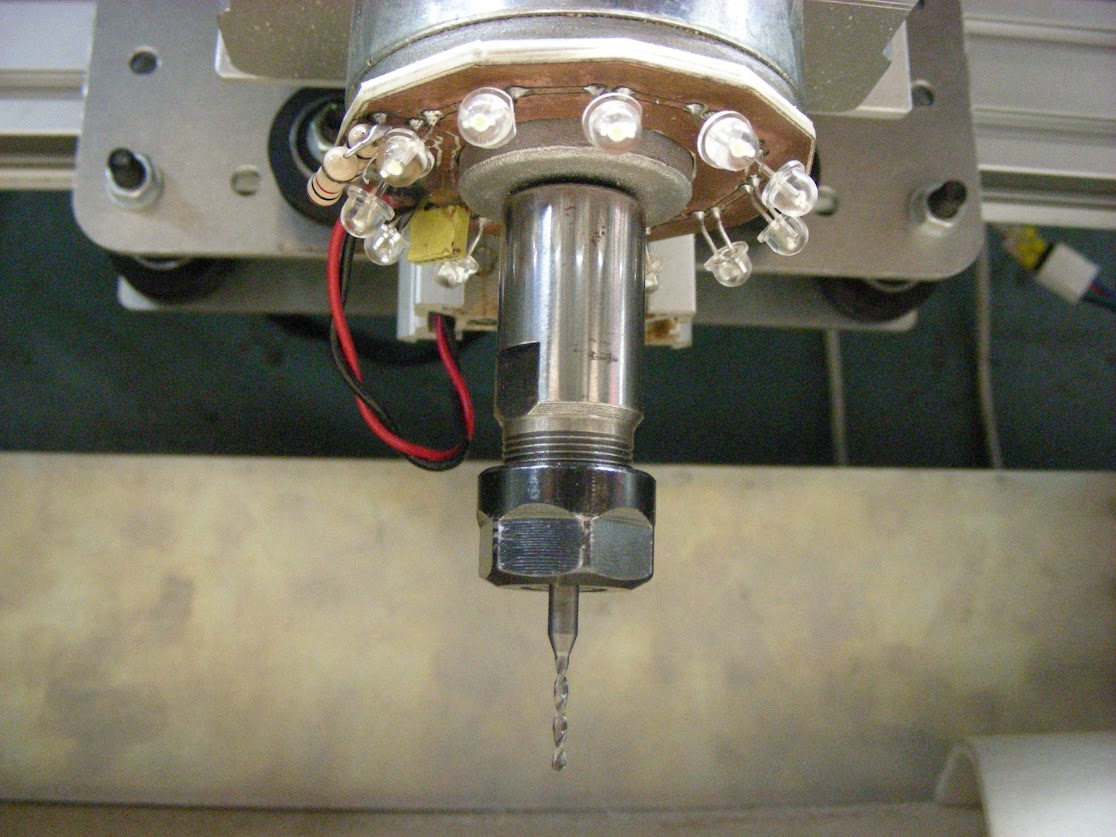 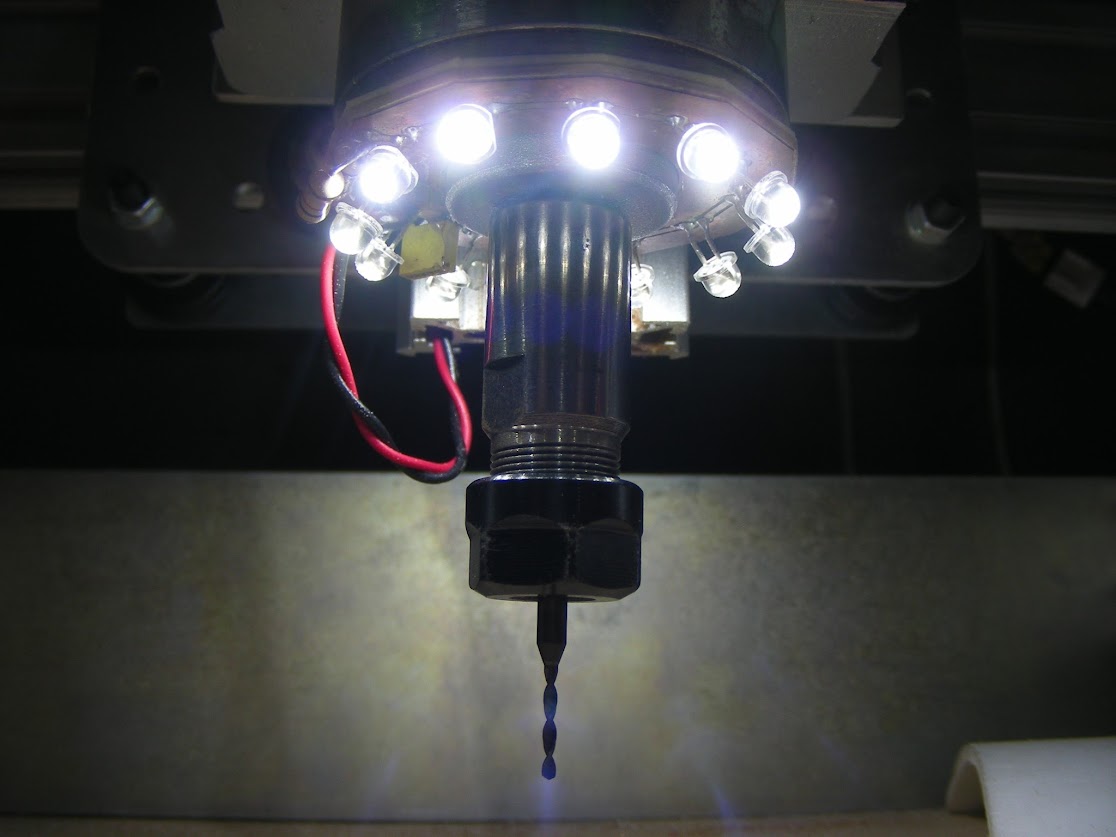 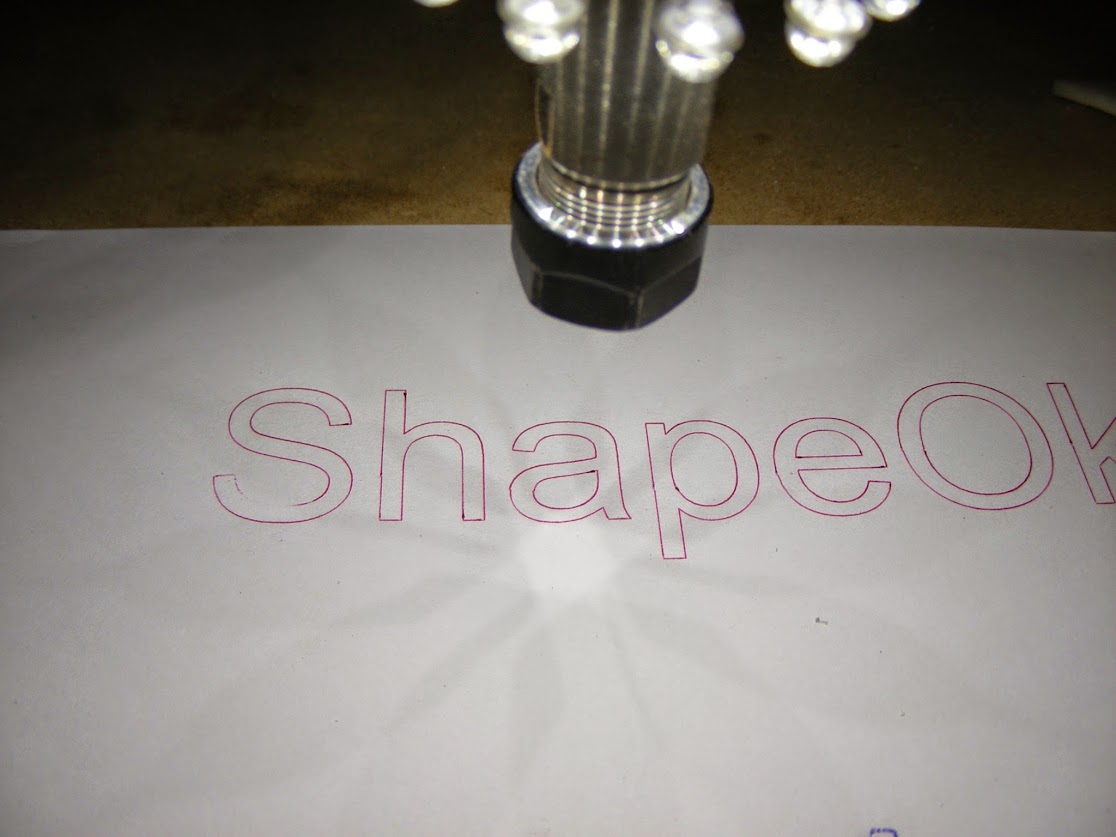 The collet throws a bit of a shadow, so I will have to lower the board.

Nice work, i like this idea, I'd be interested in the design files. One thing you could try to get rid of the shadow is to make a diffuser disk out of plexiglass; scuff one side with sandpaper and the shadows will be lessened somewhat.

Nice idea for the diffuser. Will test it out next week.

About the files, I'll post a link on Monday. They're all located on my work PC.
Anool J M : Mumbai, India
team Wyolum (wyolum.com)
Top

Neat. The shadows remind me of theBulbDial clock. (I have one.)
Ender 3 3D Printer
ShapeOko v3 serial #0004 - upgrade thread
All of my ShapeOko related blog posts
Top

The design files for the Illuminator board are at this link :

It's a KiCad project, with the new file formats (you may need to upgrade KiCad if you have the old version)
The Illum_Gerb sub-folder has the Gerber files for front Cu layer, and Excellon drill file.
I didn't make the edge cuts file, since LineGrinder can only handle square/rectangle edge cuts.
I allowed KiCad to include the Edges on the copper layer. LineGrinder then made a nice isolation cut , which I used to cut the board to size with a shear.
Last edited by Anool on Mon Jun 10, 2013 1:45 pm, edited 1 time in total.
Anool J M : Mumbai, India
team Wyolum (wyolum.com)
Top

That looks neat, but why the caps? Surely the LEDs don't mind a noisy power supply. Not installing the caps has another, frivolous advantage: it lets you use PWM to power the board, if you feel inclined to vary the brightness at some point in the future.
Proud owner of ShapeOko #709, eShapeOko #0, and of store.amberspyglass.co.uk
Top

The Illuminator is in parallel with the spindle, so I just wanted to be safe. Spindle is 300W, driven from a 450W Meanwell SMPS. Even so, the LED's go Off for an instant when the spindle is turned on. At the moment, there's just a 100nF.
PWM - maybe at a later date. Right now, I'm just keen to get the ShapeOko up and running.
Anool J M : Mumbai, India
team Wyolum (wyolum.com)
Top

How is the board attached to the spindle? Are you happy with the eBay spindle?
Top
Post Reply
11 posts