I'm looking for a resurfacing bit and ran into the Freud 16-106 mortising bit. Does anyone have experience it? It's and 1 1/4" dia on an 1/4" shaft and sells for about $25. It does not have removal cutter heads like bit time fly cutters, but it's a whole lot cheaper.

I use a similar bit that is 3/4" in diameter and it works nicely. You have to have the spindle perfectly plumb or you will get ridges. Also with a bit that big you will want to run at the slowest speed.
BRuce - SO2 #4798 - IC's Z axis upgrade, customized Z rail and Z motor mount, spindle Dewalt 611
Top

Thanks for the caution. I help out at the local high school. They have a 4'x8' commercial CNC flatbed router. Last year I used their fly cutter to resurface their spoilboard, but now the fly cutter has gone missing. Since the school has no money, the teacher challenged me to find a cheap replacement.

Thanks for the help. I'm also looking for a surfacing bit for my ordered SO3. For the SO3 I'll use a smaller bit.

You are welcome. I have actually considered the larger bit for surfacing my SO2, just haven't pulled the trigger.
BRuce - SO2 #4798 - IC's Z axis upgrade, customized Z rail and Z motor mount, spindle Dewalt 611
Top

I recently picked up one of these little 1/4" shank fly cutters from Micromark for $9.95, and a length of extra 1/8" square blank for making more bits.

I'm still working on suitable grinds (read: I have no idea what I'm doing, but have been hacking at a piece of tool blank with a diamond abrasive wheel based on mutually-disagreeing instructions and pictures on the internet), but the initial results for quickly skimming off large flats are encouraging.
Top

[quote="PAPPP"]I recently picked up one of these little 1/4" shank fly cutters from Micromark for $9.95, and a length of extra 1/8" square blank for making more bits.

Sure, pictures and details from my most recent attempt, spindle is one of those Chinese 300W ER11 models on a speed controller, stock is a piece of EPS insulation foam (my favorite test material; stupid cheap, shows mistakes, crashes won't hurt anything) loaded up in Shapeoko #1015 (a v1) with its persistent collection of half-finished mods. The cuts are just being made by hand writing a few simple G-Codes into the LinuxCNC MDI. 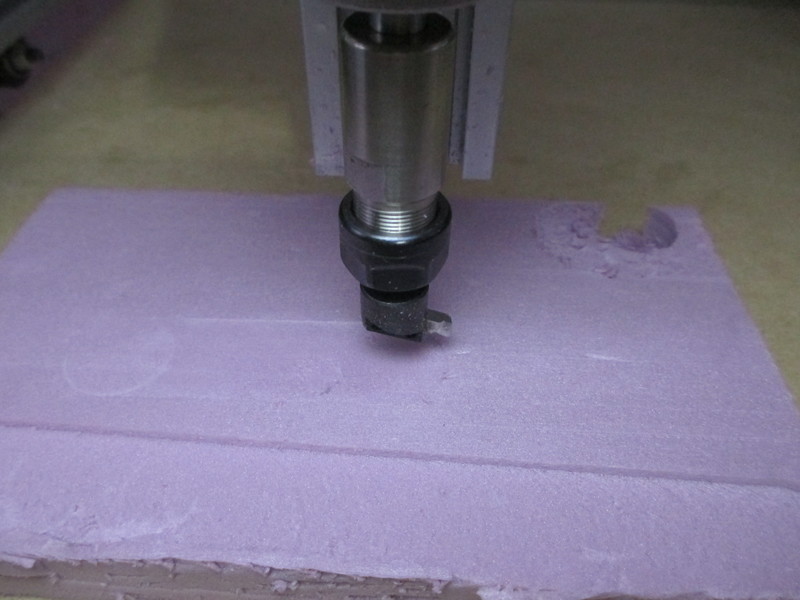 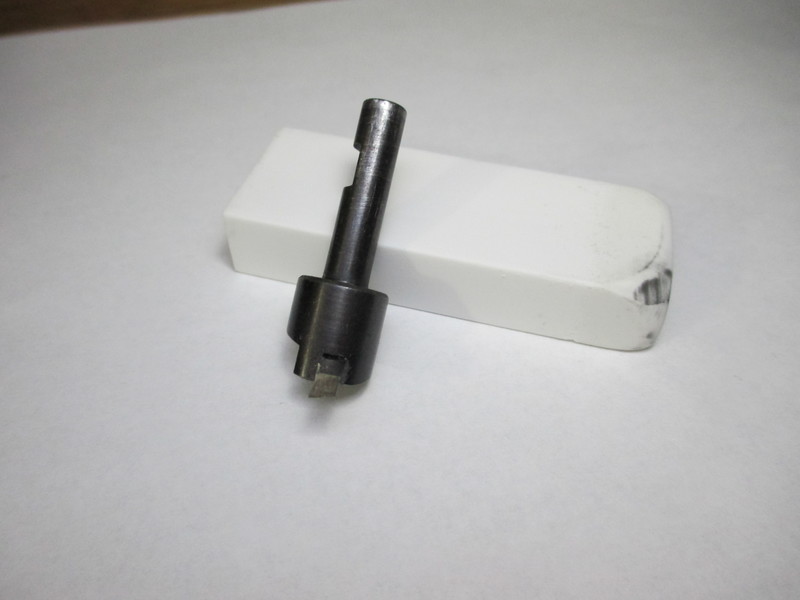 I don't have a grinder so I've been using the flat of one of these little Harbor Freight Diamond Cutting Discs chucked up in a rotary tool as a makeshift grinder, and using the fly cutter itself as a holder for the blank while grinding. It's a little hard to get good flats and is if anything too aggressive, but I'm making it work.

The pictured cutter is aiming for a geometry vaguely similar to this example. It spins with the pointy part of the grind leading, the relief above and behind it are in principle so only a small cutting edge bites material, and there is somewhere for the swarf to escape. It made a not-entirely-terrible finish in the test cut on the attempt it's hanging over, the cut across the front of the piece of the foam was a previous geometry that wasn't relieved enough and tore more than cut and the funny shaped hole at the back is where I forgot to reset my coordinates to the work piece, and plunged the fly cutter almost to the bed.

I'm surprised by how little noise it makes when spinning the thing even at inadvisable speeds, grinding doesn't make much difference beyond the inherent uneven weight distribution. That said, I haven't tried to make any particularly deep cuts and/or tried it on hard materials yet.
Last edited by PAPPP on Wed Feb 11, 2015 5:32 am, edited 1 time in total.
Top

Thanks for the great pictures. Of course I've never ONCE driven a bit thru the spoilboard and into the bed. It was actually twice.
Shapeoko 3 - #13, dust deputy, precision collets, limit switches.
SVEMakerSpaces
Top

PAPPP
Did you ever test on spoilboard or other hard surface yet?

I played with repeatedly skimming the surface off a little chunk of polyethylene cutting board this evening. I'm having the first inklings of competence with the fly cutter. Piece is about 3.25x1.875", has a rough surface and a rounded corner. It's just held down with a strip of carpet tape. 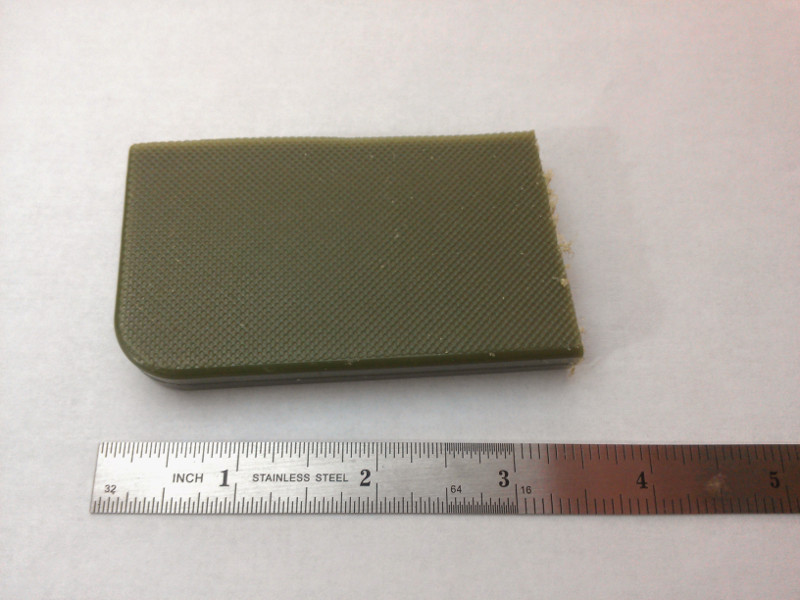 I have no idea how to properly measure the effective radius of the ground and mounted cutter, I just scraped a diameter turning the spindle by hand and roughly measured that for about 7/8" diameter. Depths are referenced by jogging until I can just detect the tool scratching the part when spun by hand, usually on the x=0 (left) end.

The standard rule that you should not climb cut soft plastics asserts itself even stronger with a fly cutter, it makes a ragged mess (program passed l-r, r-l, l-r, later attempts always cut l-r). 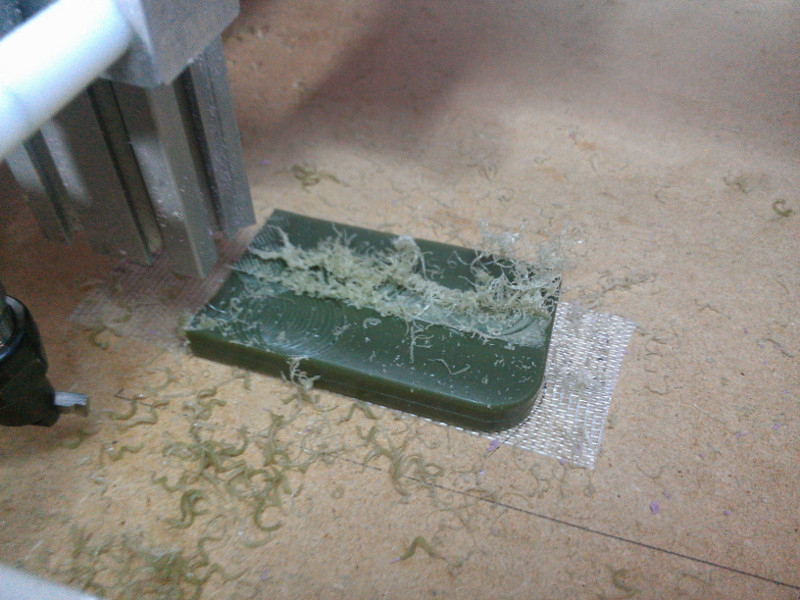 It's possible for the fly cutter to bite and pull the material up (that's the ugly too-deep area up front). The rest of that cut is spun up to about 2KRPM off the side of the part, then passed completely across at 20IPM feed, something like .02" DOC (it was skimming off some previous "less successful passes" so it wasn't quite even. 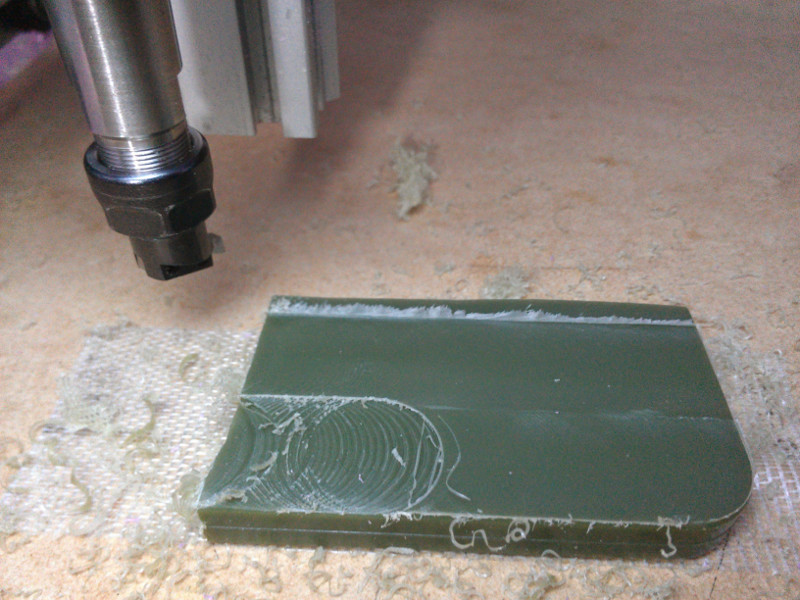 A complete surfacing finished at about 2500RPM, .015DOC. Either side of the line is as cut, then after swiping a scale across the top to knock off the melted on swarf/burrs/whatever that thing plastic does is called, it's only loosely attached. 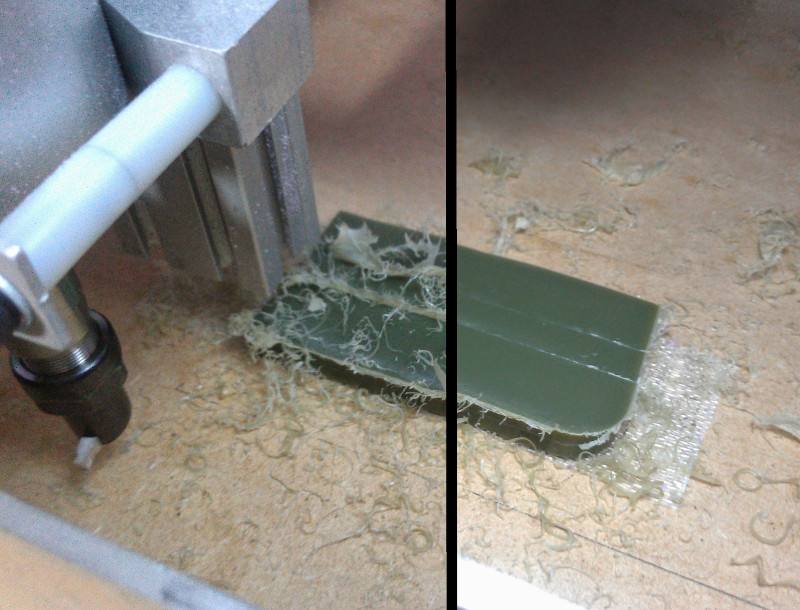 The code for most of those attempts was basically the following with the depths and speeds tweaked.

By the end of my experiment (after a bit of deburring) I'm getting results about like this, which are acceptable but not great. I try not to run my machine at night for the neighbors, so this was the time-dictated stopping point. 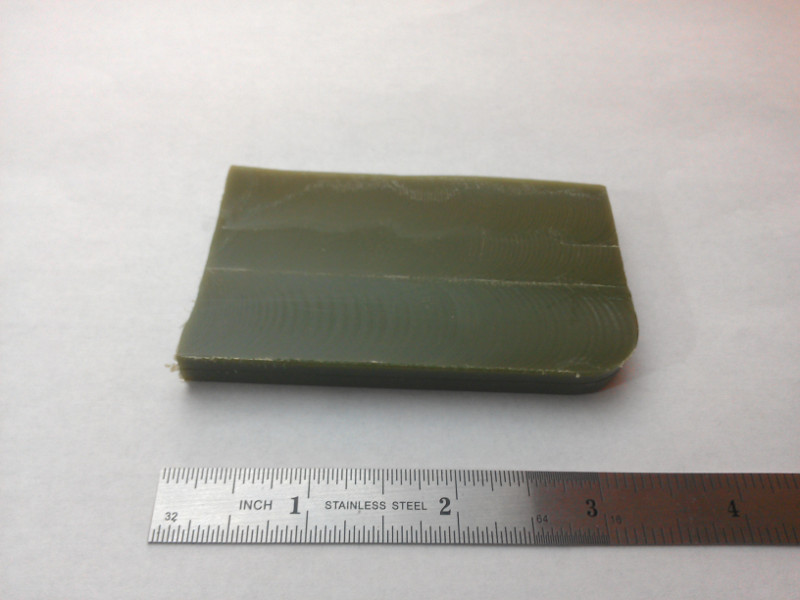 It looks like the sweet spot is somewhere around 0.02" DOC, just as the Internets promises, but some of that is just that my spindle is only 200W and 7/8" is a lot of leverage compared to a <1/8" cutter so it bogs down easily. The visible ridges from the step-over are quite minor to the touch.

The stock Shapeoko 1 fiber spoil board is easily distorted, and I have sound-deadening feet under it so it tends to take a bit of double bow, I really need to suck it up and mount to better plywood or aluminum plate or something, because constantly fighting with flatness sucks. I haven't seen any inserted/preground/etc. bits in the 1/8" square size, and this weird little $60 Sherline thing is the only fly cutter in this size range designed to take inserts I've seen.
Last edited by PAPPP on Tue Feb 10, 2015 5:20 am, edited 1 time in total.
Top
Post Reply
22 posts