I recently cut a bunch of acrylic and was suprised at how the swarf got everywhere, including the keyboard on my notebook 5 ft away. I decided that I needed a dustshoe to be able tocut anything this messy again.. After searching I found that Improbable Construct was kind enough to make the files for his version available. Unfortunately the gcode was for Mach3 and I use GRBL, and the DXF proved difficult to convert to gcode as I use Linux. So I set about making a Python script that generates an approximation of IC's version using AnthonyB's handy python lib of CNC functions.

Here are the results of using it. This is about the same size (I think) as IC's version and is cut in 12.5 mm acrylic. I used 5 x 8mm magnets and pressed seated them with a hammer and a small block of Oak. Also the vacuum port is configured at 30 mm in my version (but you can adjust the variable to match a larger hose if desired). 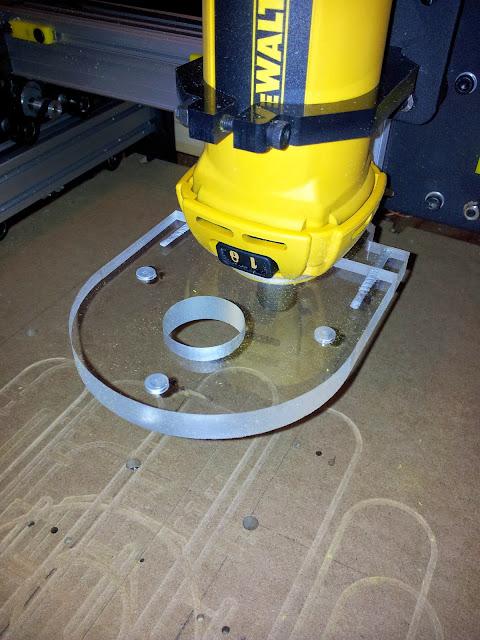 The extra cuts visible in this are from an aborted attempt where I had mistakenly cut the magnet pockets from the outside of the pocket instead of the inside. I was able to flip the material and save the job with onlyh some minor cosmetic effects. 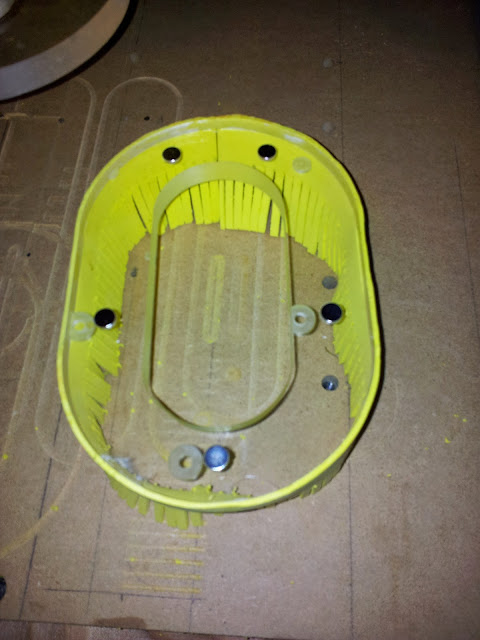 This is the assembled unit. 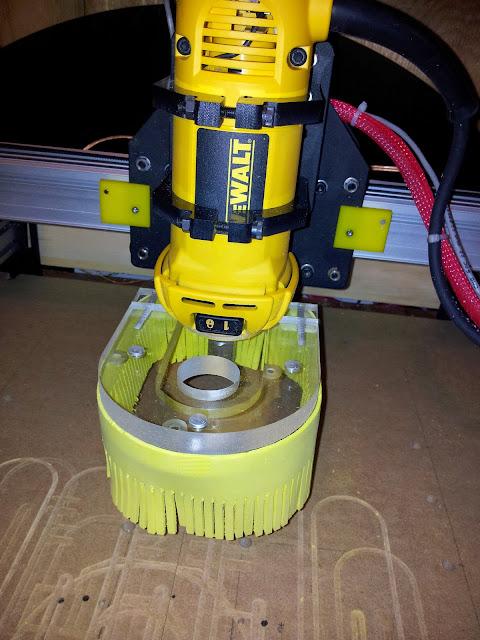 If you want to use the (attached) python script, you will need AnthonyB's lib found in the wiki (https://bitbucket.org/anthonyb/python-gcode/).
Hopefully it helps someone in a similar situation.

That looks really nice. Good work!
I will add a bit of caution about pressing things into acrylic. It tends to "store" energy and may randomly crack.
I tried pressing in the magnets on my DWP611 shoe and broke a couple of them.
I did find that heating up the acrylic helped but ultimately I found that glueing the magnets was safer and faster.
Shapeoko #Classified some of the bolts may be original parts.
Shapeoko 1 # ???? Stainless plates, still in the box.
Shapeoko 2 # 3926 not stock
Shapeoko 3 # 0003
Store:
http://ImprobableConstruct.com
Twitter:
https://twitter.com/ImprblConstruct
Top

Nice Dust Shoe..
This is exactly what I would like to build, now that i am able to... ha...
Anyway, do you have the gCode that is not dependant on Python?
Do you have to run this python code to create the gCode? it wasn't clear to me.