by baudot
I made this tiny test CAM program... 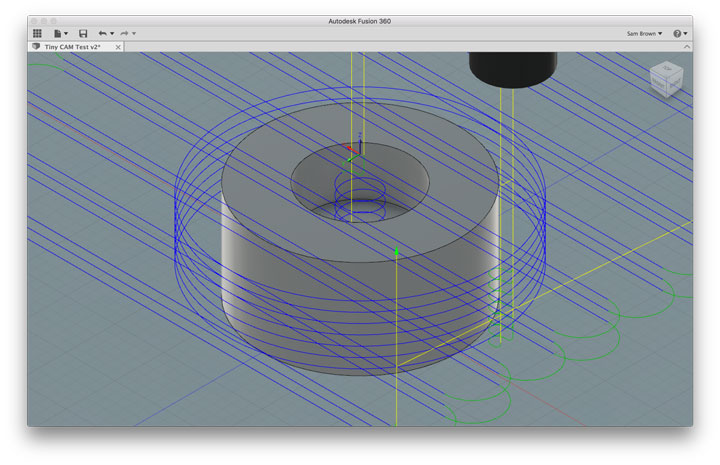 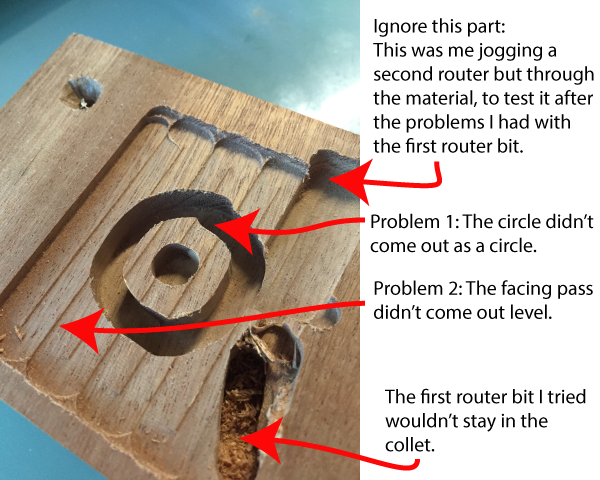 P.S. One trick I'm happy with in my setup: That tiny computer that's running the ShapeOko isn't nearly powerful enough to run Fusion 360. It's just a cheap little machine I got so I wouldn't be anchored to the ShapeOko while it worked. The folder where Fusion 360 drops CAM files is set to automatically sync between my main computer and this little laptop, using BitTorrent Sync. So I can work on my main machine, save the CAM program, walk over to the ShapeOko and fire up the CAM program I just finished there.

by RoguePirin
It looks like you machine is not square, and you may have not accounted for belt stretch. Follow the links Will has provided and you will get much better results.

Also, when you jog, it should be very smooth; no stuttering. As you said, it could be belt tension. It could also be that you are jogging too fast.

by baudot
Thanks for the links. That's.. a LOT of trials to try. I rather wish there was a flow-chart to narrow down which ones to do first, based on what was going wrong.

Not as if I had anything else planned for today, though. Tuning, here we go!

by cvoinescu
Something is very loose. You can usually tell by turning the machine on so that the motors energize, and, with the spindle off, trying to move it by hand. You'll be able to wiggle it a little, and it shouldn't be too hard to tell which parts move with it and which don't. That should give you an idea of what needs tightening.

by baudot
I'm needing to do something more than just tightening the belts. I've tightened them as much as I feel safe doing, and while the cuts are visibly cleaner, both the problems are still present.

Would someone recommend a known-good gCode file for me to test, for a quick, simple part using a 1/4" bit? I'd like to rule out that I'm generating bad code. In addition to the new ShapeOko, I'm also using the CAM features of Fusion 360 for the first time. Rather than trusting my work there, I'd love to have a known-good gcode file to test with. (I've already run the pen test. I'm looking for an actual carving test.)

by DRobs86
If I were at home I would send you a test file. There are a couple out there though. Check the wiki.

I dont think this is your only problem, but what are your feed and depth settings.

by Bonch
It looks to me that your Z-axis is very loose. Check your eccentric nuts and make sure the v-wheels are snug on the lower part of the Y-rail and that when you move them they are able to slightly move the Z-axis on the Y-rail. Also it looks like your router is not square to your spoil board which is causing the ridges. You may want to check all your bolts and make sure they are tight and adjust all the eccentric nuts.

Try that cut again and see if it cleans up after the above is adjusted.

I started off going faster than that, with deeper passes, but the cuts got thrown inches off, especially on the X axis, at high speeds.

by DRobs86
It doesnt look like it to me, but are things too tight? If you push things around by hand does it all slide smoothly or does it cog along? If it cogs along then the eccentrics are too tight and the v wheels have deformed under the pressure.